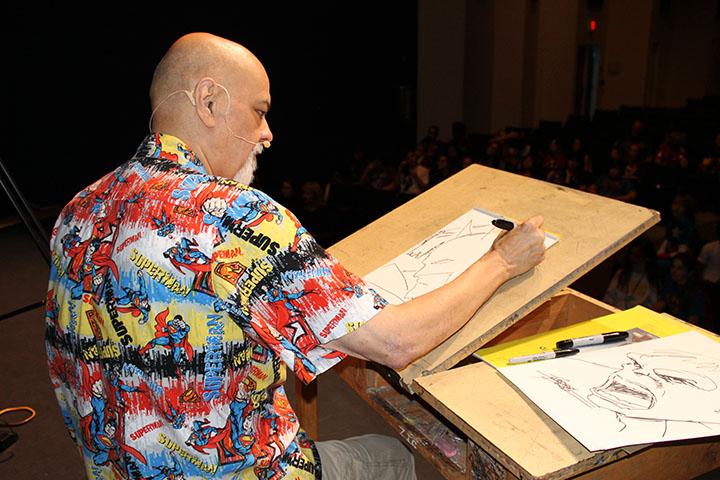 Perez sketches his beloved characters in front of the student audience before his talk back session.

Arts Avengers day was the first of its kind celebration at Bak.  Students and teachers wore superhero costumes in honor of DC and Marvel comics cartoonist George Perez and his wife Carol Flynn who both spent time with students.

“The reason we decided to do Arts Avengers Day is because we had the opportunity to have George Perez, a comic book author, come to our school. [Susy Diaz] from the Middle School of the Arts Foundation arranged the event,” Glen Barefoot, visual arts teacher said.

George Perez, the author and illustrator for DC and Marvel Comics  has helped design titles such as  “The Avengers”, “Fantastic Four”, “Superman”, “Wonder Woman”, and “Teen Titans”. During his visit, he talked about his life long career as an artist, along with its challenges and rewards.

“Well I love telling stories, and I’ve been doing this since I was a child. To live and create a make-believe world, and get paid for it, is the best thing. It keeps me young,” Perez said.

Perez said, “I taught a master class for some of the students, and I will be doing a Community Talk Back, where I get to talk to the students and they get to learn what I do. To see the children at the classes to be wrapped around me talking was so amazing.”

For over three decades, Perez has spent his artistic career in the comics book field.

“Primarily, I’ve been doing superhero comics because those are the most popular.  Since I love drawing, I started doing team comic books instead of the one hero books,” Perez said.

Working with other artists and several characters on a comic book project for some can be difficult, but Perez had a different take on team comics.

“I believe that the more characters, the better,” Perez said.

With so many characters that Perez created, it was impossible for him to pick his favorite.

“It’s like asking me to choose between my children,” Perez said. “You wouldn’t tell a mother of three to say who her favorite child is, so I feel kind of the same way.”

Arts Avengers Day was a success.  Students and staff enjoyed both Perez and his wife Flynn’s visit to Bak.

Natalie Sharp, communications teacher said, “It was such an honor to have both Mr. Perez and Ms. Flynn here at Bak.  The kids got so much out of their visit.”