Chorale to broadcast on The Education Network this December 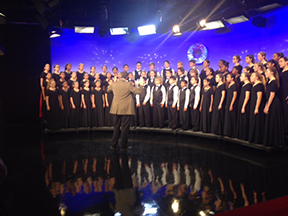 With perfect pitch, Chorale prepares to be filmed for the Education Network’s (T.E.N.) Holiday Special. T.E.N. is the official television station for The School District of Palm Beach County.

Students in Chorale earned the opportunity to be filmed for The Education Network’s Annual Holiday Special. Bak was one of the few schools featured in the program.

“Some of these students will go into performing,” Kent Taylor, vocal teacher, said. “For those who do, this experience will help them get over their nerves when on stage.”

The special will air in December, and anyone can tune in to watch and listen to Chorale as they sing songs such as “Deck the Halls” and “Here We Come A-Caroling,” Rachel Robinson, seventh grade vocal major, said.

“It’s good publicity for the school and music department. People from the community will really get to experience what Bak can do,” Taylor said.

This was the first year that Bak was chosen to perform in the special. It was a huge honor, according to Taylor, but many students may have felt stressed or worried.

Lacie Michaelis, seventh grade vocal major, said, “Of course I’m nervous. I want to do well and looking bad in front of the audience is my worst nightmare.”

“This opportunity exposes them to the behind-the-scenes part of a production. They will get to see producers and really learn how that industry works,” Taylor said.

Though it may have been challenging for students not to get nervous while preparing for this event, many felt that what mattered most was that they performed to their best ability.

Taylor said, “Ultimately, I want their friends and family to see their success and be proud of what they’ve done.”