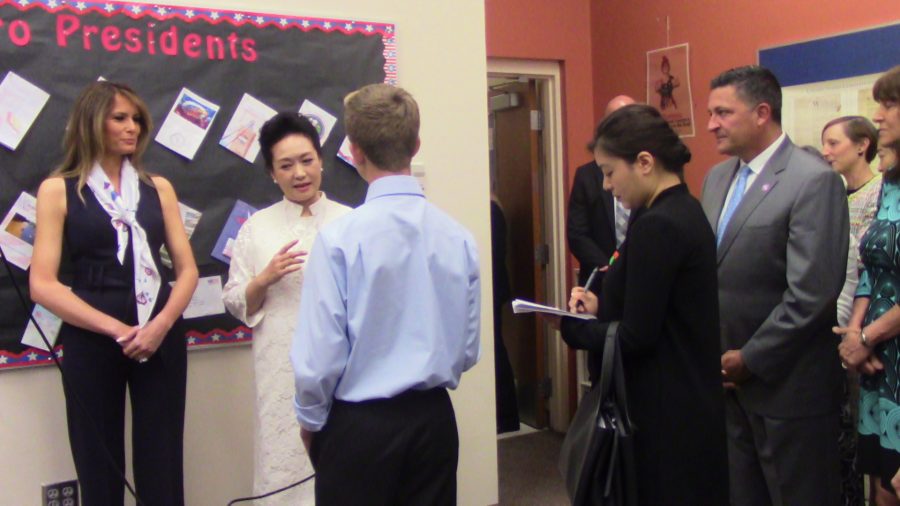 Friday, April 7 was a day that will go down in Bak history. Melania Trump, first lady of America, and Madame Peng Lyuan, first lady of China, visited Bak for a brief time. The visit included a variety of mini-events and a once in a lifetime opportunity for the students.

“This visit was great for Bak because now everyone knows how amazing our school is,” Ava Murray, seventh grade communications major, said. “It represented how great of a school we were because the first lady chose to come here.”

The first ladies arrived at Bak around 10:45 a.m. and stayed for around an hour. During their visit, they enjoyed a variety of things including several music performances, such as the girls chorus who song “Astonishing”.    Students had the opportunity to meet and converse with the first ladies as they walked through the music suite. One student even had a conversation with Madame Peng in her first language, Mandarin Chinese.

Students in communications also got the privilege to record the historic moment.

“The best part about their visit was being able to talk to such important people, let alone see them,” Caleb Harris, eighth grade communications major, said. “It was a whole different experience.”

Harris and his partner, Adam Goldstick, were given the opportunity to interview the two first women. They were the only scholastic media outlet given clearance, which was a “great honor.”

“It was a great honor to interview them,” Harris said. “Not many adults have the opportunity to do that, let alone a kid my age. It was nerve wracking and a privilege.”

One student was chosen to introduce Trump and Peng. Murray introduced the first ladies with a speech and presented the civics class to them.

“I was truly honored to meet the first lady because she, like Donald Trump, represents our country,” Murray said. “I was so proud to shake her hand and meet her. It was a once in a lifetime moment that I will remember forever.”

This visit was both amazing and unforgettable. It was something that will be remembered by all students that participated in it.

James Walter, seventh grade communications major and student in the civics class, said, “It was a surreal event. You can’t really describe it.”