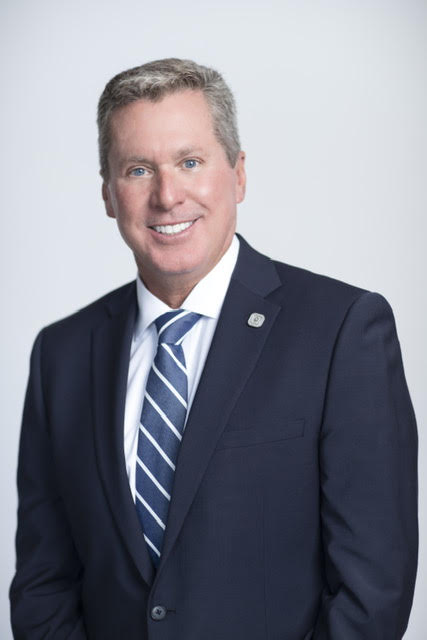 After working in several key positions within the school district, Mike Burke moves into the superintendent role. “When you are entrusted with enormous responsibilities such as a $4 billion dollar budget or running the tenth largest school district in the nation, you have to earn the trust of the school board and community and fully answer any questions they may have,” Burke said. Photo courtesy of Mike Burke

Former Interim Superintendent Michael Burke was unanimously voted in as permanent superintendent of the School District of Palm Beach County.

“I am very excited and honored to serve as permanent superintendent of the School District of Palm Beach County.  Our students, teachers, principals and support staff make us one of Florida’s highest performing large urban school districts.  I know with hard work and dedication we can continue to improve the education we offer the community’s children,” Burke said.

Since July, when previous Superintendent Donald Fennoy suddenly stepped down, Burke had been serving on an interim basis.

Before serving as superintendent, Burke had worked many jobs at the school district, including chief financial officer (CFO), responsible for handling the district’s $4 billion budget.

“It has been incredibly helpful to have served the district as CFO for 15 years.  Everything we do carries a financial impact and being in the CFO role forced me to learn a great deal about running the district from a business perspective.  I have negotiated a wide array of contracts over the years, including all of our union labor contracts, as well as the purchase of roughly $500 million in goods and services each year.   I also have brought thousands of agenda items to the Board over my career.  As CFO, I also got to know how district departments work together to support the daily operation of our schools,” Burke said.

However, Burke’s CFO experience was not the only way he prepared for the role.

“I have worked closely with seven superintendents in Palm Beach County over the last 23 years and I learned from all of them.  I did my best to absorb what I believe were the best practices from each of them and have tried to avoid repeating anything that did not serve the district well,“ Burke said.

Burke also hoped to connect with students and schools all over the county by filling in as a substitute teacher.  This marked the start of an initiative to stop teaching shortages, by making district workers fill in missing jobs.

According to school board Chairman Frank Barbieri in an interview with WFLX, “We are lucky at this point, and I don’t believe we can find anybody in the country that has both the financial background, which the district sorely needs with a $4 billion budget and an academic background that Mr. Burke certainly has.”