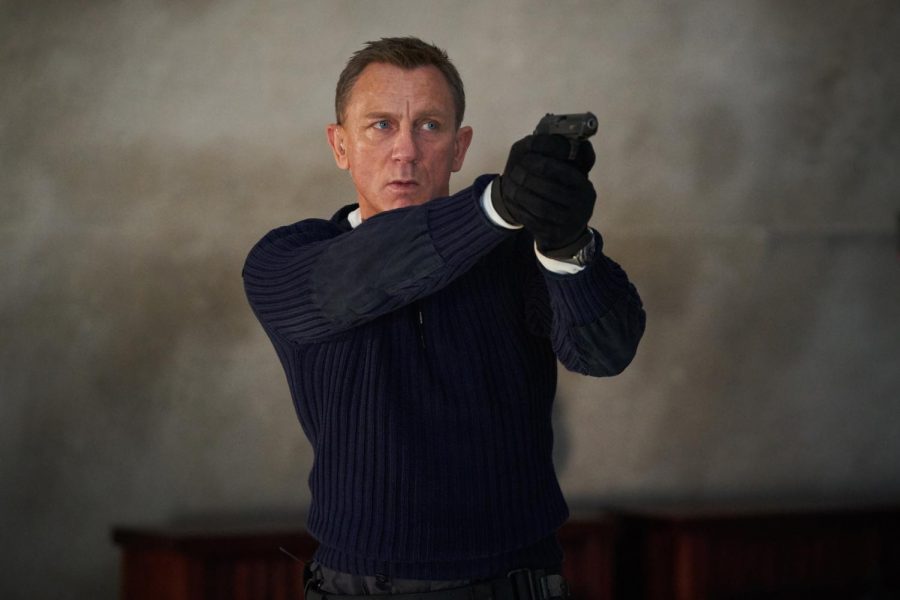 Daniel Craig as James Bond in "No Time to Die." (Nicola Dove/Danjaq LLC/MGM/TNS)

For over a decade, Daniel Craig played Ian Fleming’s 007, gracing viewers’ screens with his fantastic, yet heartbreaking, take on James Bond.

Overall, Craig played the famous spy in a total of five movies. His run as Bond began in the 2006 movie Casino Royale alongside actor Mads Mikkelsen and actress Eva Green. Casino Royale showed a darker side of Bond, but it also revealed the ongoing theme of Craig’s movies; perhaps Bond would be better off settling down. Critics loved it, as it earned a 94 percent on Rotten Tomatoes, giving it the title of the highest-rated Bond film in Craig’s franchise.

His next 007 film, Quantum of Solace, was not as well-received. Earning a 64 percent on Rotten Tomatoes and a 58 percent on Metacritic, Solace took place exactly 10 minutes after the events of Casino Royale and followed Bond and companion Camille Montes (Olga Kurylenko) on their quest to take down ruthless business owner Dominic Greene (Mathieu Amalric). It was released in 2008 and is a direct sequel to its predecessor.

After the box office failure of Quantum of Solace, the future of the 007 franchise seemed bleak. However, Skyfall brought fans’ hopes up again, being the second-highest-rated 007 Craig film in the series. Skyfall revisited Bond’s childhood home and introduced new characters such as charismatic villain Raoul Silva (Javier Bardem), who wanted revenge on M (Dame Judi Dench), and Bond’s new Quartermaster, Q (Ben Whishaw). The film earned a 92 percent on Rotten Tomatoes and was highly regarded amongst Bond fans. It was also the movie that marked 50 years of James Bond.

Unfortunately, it became a trend with Craig’s films to lose momentum after a hit. While the opening sequence of the 2015 Bond film Spectre was thought to be one of the greatest scenes in cinema history, the rest of the movie fell short, earning a 63 percent on Rotten Tomatoes. This made it his lowest rated Bond film to date. The plotline followed Bond and Madeleine Swann (Lea Seydoux) as they tracked down Ernst Stavro Blofeld (Christoph Waltz) and his secret organization, SPECTRE.

Released in 2021, No Time To Die marked the final time Craig would play 007. Earning an 84 percent on Rotten Tomatoes, the film fared better than its predecessor, Spectre. In this movie, Bond enjoyed a quiet life with Swann, but was forced to rejoin MI6 alongside the new 007, Nomi (Lashana Lynch), to take down Safin (Rami Malek), who threatened his home and lover. The movie was a tear-jerker and wrapped up Craig’s time as Bond well.

Despite Craig’s exit from the Bond role being fairly recent, there was already talk of who would fill the now-open position of 007. English actor Idris Elba was rumored to be in the running for it, but he publicly said that he was not going to be the new Bond in an interview with ITV London.