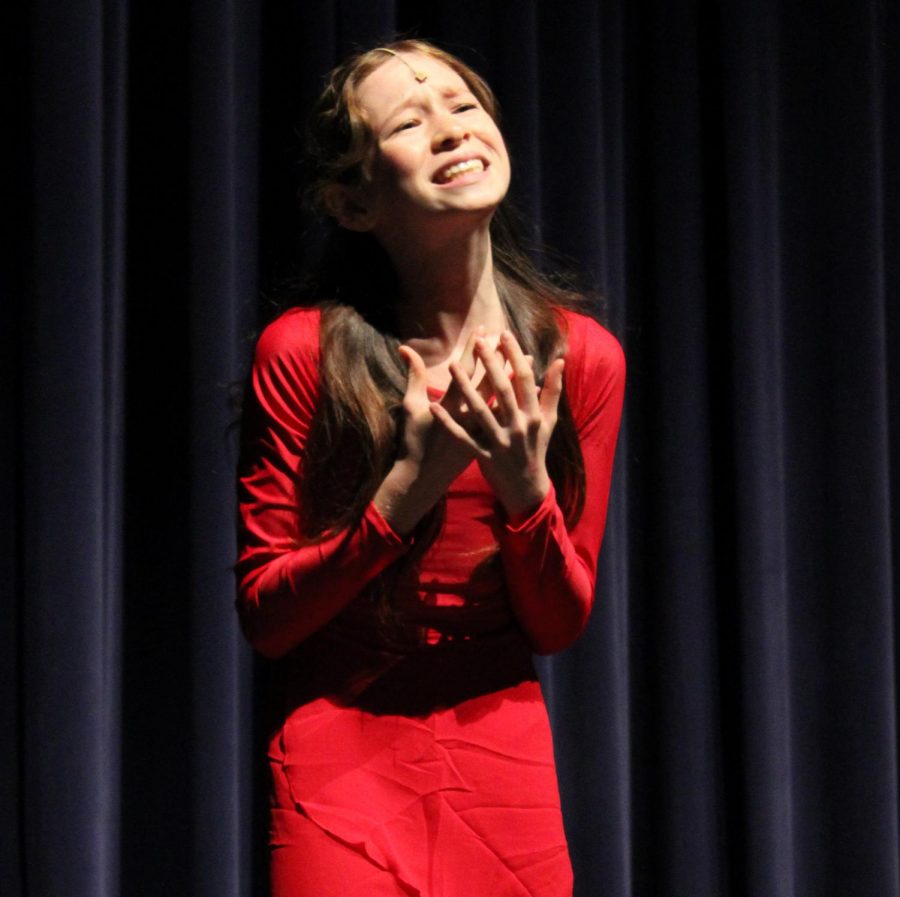 Eighth grade theater major Sofia Dow performs her solo in “A Chorus Line”. “When I first stepped out onto the stage I was nervous, but when I started dancing I relaxed and realized how amazing it was to be dancing in front of 300 people,” Dow said. The musical “A Chorus Line” was about being a professional actor and singer, and auditioning for a chorus line.

Artsgiving performers walked onstage with a mixture of nerves and exhilaration. They glanced up and saw a crowd fill the main stage. The conductor said a few words, the students started, and their worries floated away along with their music.

“I felt nervous [when we were walking out on stage] because when you perform you always want to do your best, and you’re afraid of making mistakes,” Lara Miranda, eighth grade vocal major, said.

Others felt excited while walking onstage, but their feelings changed during their performance.

“While the band was performing I realized we were not playing as well as we rehearsed the music, so I started to feel upset that we were not giving our best work,” Jackson Murray, eighth grade band major, said.

The theater department presented a compilation of all the fight scenes in “She Kills Monsters” (a theater production). Also they gave a sneak peak of “A Chorus Line”, and showcased three solos. “A Chorus Line” debuted in the first week of December.

“We wanted to do ‘She Kills Monsters’ last year, but it’s a very sweeping piece, and since we had to do everything virtually, we couldn’t put it on stage and have an audience.” Erin Amico, theater teacher, said. “We felt that the nature of that show, with all the combat and activity, really needed to have an audience. So, we held onto the show to perform when things opened up.”

Martha Satinoff, dance teacher, said, “We chose these pieces because it shows some variety of the kids, and what they can do.”

Artsgiving was an annual celebration of the arts.

“Artsgiving helps us all gain a better understanding of how hard students in each major have to work,” Miranda said “Whether it be creating a news show or radio, singing, playing instruments, dancing, acting – during Artsgiving, we’re able to appreciate each one.”