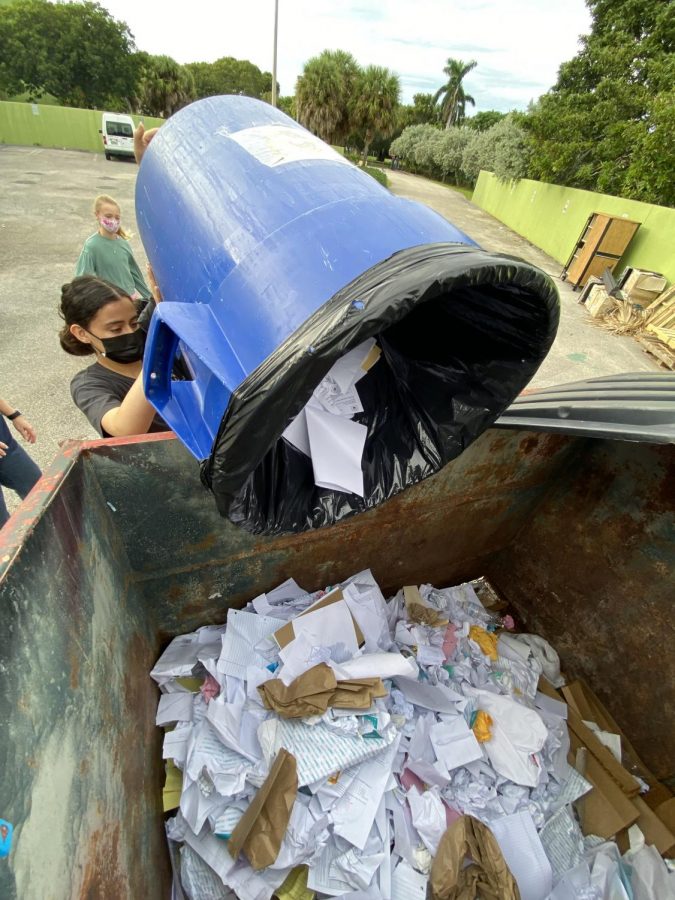 Dumping paper into the school recycling bin, eighth grade theater major Karina Brown helps the school become more environmentally conscious. Bejarano said, “We collect paper and cardboard, and then we also are doing a cleanup of the grounds.”

Over the past few months, Green Team has helped clean up the school.

Tamara Bejarano, club adviser, said, “Green Team collects paper and cardboard all over campus.  We also collect textbooks at the beginning of the year, and we donate items to visual arts. They will reuse some of the items that we have, and put it into their artwork.”

In the Green Team, there were many roles that students took on, such as president and secretary. However, Green Team influenced many students to help the environment outside of the club.

“Besides the club meetings, I usually pick up trash here and there and try to encourage others to do so,” Lian Dussie, seventh grade communications major, said.

Green Team’s reach had extended so far that even non-members of the club started to be more aware of the environment around them.

Through cleaning up the school and placing flyers all around the school, Green Team influenced others to join the club.

“I think they [Green Team] are pretty helpful, and I want to maybe join them next year,” JoAnn Choi, sixth grade piano major, said.

Green Team sends out a positive message for members of the club, and all students around campus.

Dussie said, “If you want to have a world to live in, put in the work so we can achieve it.”