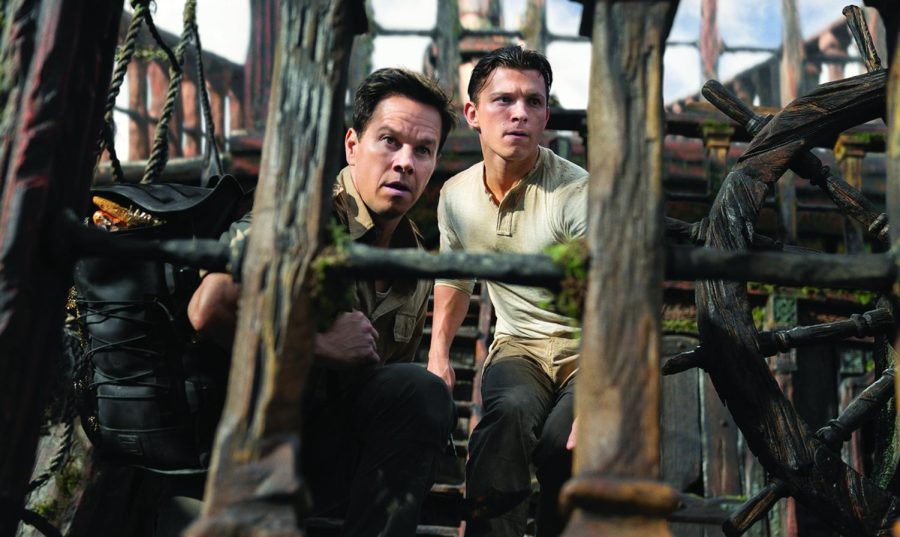 Mark Wahlberg as Sully, left, and Tom Holland as Nathan Drake in "Uncharted," based on the popular video game franchise from Naughty Dog. (Clay Enos/Columbia Pictures/TNS)

In search of the long-lost gold of Ferdinand Magellan’s ships, a young man teamed up with a treasure hunter on the adventure of a lifetime.

Starring Tom Holland and Mark Wahlberg, director Ruben Fleischer turned one of the most successful video game franchises of all time, “Uncharted”, into a blockbuster adventure film.

“Uncharted” follows the story of Nathan Drake (Tom Holland), the descendant of famous pirate Sir Francis Drake, on his journey to becoming the swashbuckling treasure hunter that appears in the video game.

Before release, the film already had access to a large fanbase, with the most recent video game installment “Uncharted 4” having sold more than 37 million units. In homage to the game, Nolan North, who voiced Drake in the games, made a cameo appearance in the film.

Part of what made “Uncharted” interesting was the true history behind the plot. Real explorer Ferdinand Magellan attempted to sail around the world, but died along the way. Nonetheless, it was also true that the writers fudged a little bit on the details. There was no evidence that Magellan ever found a fortune such as the one pictured in the film.

Another issue with the film was the pacing. Throughout the entire first half, the plot seemed to drag, with some exciting scenes here and there. There was not a lot of action until the very end of the film. Since I showed up for an adventure film, this was a problem.

Even so, the movie had some great moments, one of them being Victor Sullivan’s (Mark Wahlberg) character arc. After being first introduced as a selfish and untrustworthy character, Sullivan was able to prove his worth as a friend to Drake in the end.

Despite some online controversy over the casting of Holland as Drake due to his young age, I believed that he was the right fit for the role. The role of Drake was meant to be a suave and acrobatic character, and Holland checked off all the boxes.

The antagonist of the film, Santiago Moncada, played by an underused Antonio Banderas, added another level of mystery to the film despite being predictable at times.

Overall, this movie was a great way to spend a night and I thoroughly enjoyed viewing it. I would rate this film a four out of five stars.