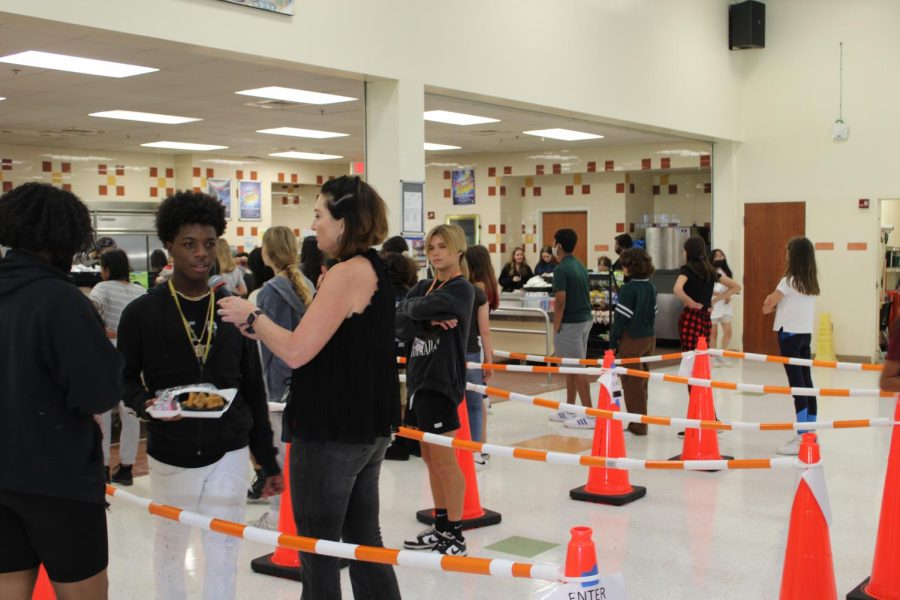 Rushing in after the regular line, kids in the a la carte line get to choose between items like chips and cookies. Jacob Quartel said, “A lot of people were losing their place in line during the first semester. Now, everything is more efficient.”

Assigned lunch lines for the new a la carte line was Bak’s solution to crowding and long waits.
“We were noticing a lot of crowding instead of lines forming,” Timothy Regula, assistant principal said.
The system worked by assigning students to the fastest moving lines. When the line shortened, the a la carte line, or food available for purchase, was called.
“Some lines look long, but they move fast,” Edwin Alvarado, cafeteria volunteer said.
The number one priority was safety. During the first semester, it was hard to moderate the backed up lines.
“I make sure everyone is safe and quickly gets in and out,” Alvarado said.
The main goal was to ensure that the kids who relied on school lunch as their main source of lunch were able to get it quickly, and have enough time to eat.
“We didn’t want those who didn’t have lunch to be waiting,” Regula said.
School administration met to resolve the issue. Plans began going into effect after students returned to school after winter break.
“It was a group decision between the assistant principals and the lunch manager. Rozanski ordered the line barriers,” Regula said.
Another goal was to help the cafeteria staff. It was hard to keep the lines moving when students requested a la carte items and then had to pay.
“It lifts up the load on the cafeteria staff,” Alvarado said.
The new system was debated amongst students. There were varying opinions.
“They spread people out more evenly. I used to only go in the main line because it was fastest,” Skylar Gaffney, sixth grade communication major said.
Other ideas were suggested as alternatives that would have the same effect.
Jacob Quartel, eighth grade theater major said, “Some other solutions would be a longer lunch, or two lines at the same time.”